Rwanda has diverse habitats and ecosystems that range from humid montane forests to savannahs, lakes, rivers and wetlands which support a wide range of biodiversity. However, the Country’s biodiversity faces various threats which has led to loss of species, shrinkage in population sizes and ecosystem degradation. Rwanda’s development agenda recognizes the important and central role that biodiversity and natural resources play in terms of supporting the country’s economic growth, livelihoods as well as in the provision of critical ecosystem services such as water, soil erosion and flood control as well as climate change mitigation. Therefore, conservation of the environment and natural resources has been well integrated in country’s development blueprints such as Vision 2020 Economic Development and Poverty Reduction Strategy (EDPRS II); Vision 2050; and the National Strategy for Transformation (NSTI 2018-2024).

By 2020, the country increased the forest cover to 30% of the total land area with the forest of 724, 695 ha (30.4%) in according to 2019 forest cover mapping report. The population of the Mountain Gorilla continue to increase and Rwanda hosts half of the existing global population (estimated at 1,004 individuals by Hickey et al. 2018). In 2021, 30 White Rhinos have been introduced in Akagera National Park after where 23 Black Rhinos in 2017 & 2019; and 11 lions have been re-introduced after 10-year absence.

There is a tremendous increase in populations of other species such as Eastern Chimpanzee, Golden Monkeys, and the Grey Crowned Cranes. And the tourism continues to grow with significant part of it being nature based.

In Rwanda, all environmental fees, fines, penalties and licenses are channeled to FONERWA, the national green fund, with a vision to re-invest such stream of funds into environmental and climate activities in the country. However, since 2012, the total environmental fees, fines, penalties, and licenses accumulated in FONERWA was US$ 1.4 million, which is a mere 3.4% of total fund revenue, and presented important annual fluctuation. A study during BIOFIN I revealed some critical bottlenecks of both fees and fine collections.

Fines are collected by local government but with large ‘leakages’ before reaching the FONERWA bank account. Fees are more traceable yet sometimes not collected as stipulated in law, leading to recent law amendments in water tariffs and EIA fees. On the other hand, while biodiversity and ecosystem is one of the priority investment areas, the current fund structure does not differentiate funding source at the investment stage in FONERWA, therefore biodiversity related fees and fines are not necessarily reinvested into related communities or ecosystems. In this light, incentives, behavioral change and policy / legal or institutional strengthening need to happen in a coordinated manner in order to drastically improve the situation and collect $18.3 million over the next 10 years, while safeguarding the negative incentives of both fees and fines.

Therefore, through BIOFIN II Project, Rwanda Environment Management Authority (REMA) through BIOFIN II Project has conducted consultations at district level and raised awareness on biodiversity/environmental regulations at national level with training of mining concession owners, television and radio shows, publication of article in Newspaper and with a documentary film to increase the % of actually collected environmental fees and fines and re-invest the funds into biodiversity and ecosystem restoration.

2.     Mainstreaming biodiversity in the EIA processes

Since 2005, the Environment Impact Assessment (EIA) is mandatory in Rwanda for project developers and implementers. This is underscored in the Organic Law N° 04/2005 of 08/04/2005. The Rwanda Development Board (RDB) is in charge of EIA enforcement during its project approval process. As EIA is mandatory to apply and receive bank loans for investment projects, companies undertake EIA studies. However, the biodiversity considerations are not explicitly taken into account, and the quality of EIA reports is questionable at times. In the same regards, that consideration is missing in the current EIA guidelines “General Guidelines and Procedures for Environmental Impact Assessment” issued by REMA in 2006. The guidelines provide only thorough procedures and steps. They can be strengthened with more specific guidance on assessing, mitigating and offsetting impacts on biodiversity (or ecosystems).

Since EIA has been in the country for over 10 years, there are some experienced firms and practitioners in the country (grouped under the Rwanda Association of Professional Environment Practitioners which is a new association), as well as institutional capacity within RDB. Mainstreaming biodiversity into their daily work can have immediate impacts on the direction of investment decisions both large and small. The EIA is stipulated in the Law N°48/2018 of 13/08/2018 on Environment in article No30. Ministerial Order No 001/2019 of 15/04/2019 establishes the type of projects that must undergo Environmental Impact Assessment, instructions, requirements and procedures to conduct Environmental Impact Assessment.

3.     Establishing a Biodiversity and Ecosystems Facility in FONERWA

While a conservation trust fund has been a potential finance solution that repeatedly came up during stakeholder’s engagement, a general consensus was that Rwanda should not duplicate the efforts of an already well-established green fund, FONERWA. Instead the agreed direction was to create a biodiversity conservation facility within FONERWA.

Since its establishment in 2012, FONERWA has mobilized over 64 billion RWF from both domestic resources and a number of bilateral and multilateral donors as well as vertical funds. As revolving and sinking fund, FONERWA is a demand-based with a schedule to conduct bi-annual calls for proposals around four broad funding windows and entry-points and it works both as sinking and revolving fund: Conservation and sustainable management of natural resources; Research & Development and Technology Transfer and Implementation; Environment and Climate Change Mainstreaming and Environmental Impact Assessment Monitoring and Enforcement.

Biodiversity is part of the conservation and sustainable management of natural resources broad category, yet projects sometimes do not strictly connect with conservation efforts. Also, with the current grant scheme, communities and smaller scale projects face challenges to access the fund, which could be a bottleneck for some conservation projects.

In the framework of establishment of a ‘biodiversity facility’ within FONERWA, which will be a revolving fund with earmarked revenue from environmental fees and fines as well as a tool to attract other sources of fund, a proposal has been developed including business case and operational manuals.

The Biodiversity Finance Policy and Institutional Review (PIR) has been completed and it reviewed the challenges and opportunities surrounding the current status and potential trajectories of Rwanda's biodiversity and ecosystem finance context. The objective of this report was to analyze the adequacy of current policies, the existence of policy gaps, the translation of policies into practice, the role of the broader policy environment in influencing existing practices, the roles, responsibilities, and institutional framework to finance and manage biodiversity and existing finance mechanisms, important subsidies, laws, and trends around biodiversity finance.

The Biodiversity Expenditure Review (BER) in Rwanda examined that from 2011-2017, biodiversity related expenditure accounted for for only 0.5% to 0.9% of the total central government budget, on average external sources of funds have were 56 percent while the domestic resources allocation accounted for 44 percent. The combined aid dependency, fluctuations in biodiversity expenditures, and low biodiversity mainstreaming in the natural resource sector create high uncertainty in future biodiversity finance and management in Rwanda. 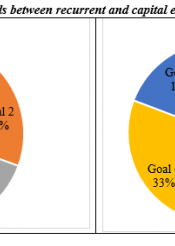