The implementation of BIOFIN in Malaysia follows government-led model, with the Economic Planning Unit being the hosting agency, operating centrally under the Prime Minister's Office.

BIOFIN national team in Malaysia provided valuable inputs on finance for biodiversity and ecosystem to the 11th Malaysia Plan. BIOFIN team is also working on one of the goals of the new NBSAP in Malaysia.

A workshop will be organized in the future, which will review the results of the Policy and Institutional Review. It will help to further develop ideas for resource mobilization. BIOFIN team is also exploring opportunities to engage with the National Conservation Trust Fund created by the Government. BIOFIN also aims to work on improving the constitutional procedures that would ease the fiscal transfers in the country.

Consisting of Eurasia's most Southern Peninsular and the northern part of the Island of Borneo, Malaysia is one of the world's 18 mega-diverse countries. The country is home to over 150,000 species of invertebrates, more than 15,000 vascular plants and 306 mammal species, including the endangered Malayan Tiger and up to 1,200 of the last remaining critically endangered Asian Elephants. Over a thousand other species in the country are categorised as threatened. Around 60% of its land is forested and 11% is part of the protected area system. Marine protected areas encompass around 250,000 hectares.

A Financial Needs Assessment is a comprehensive estimate and analysis of the financial resources needed to fully implement the biodiversity-related activities in a country to achieve its national and sub-national biodiversity targets. By comparing the expenditure on biodiversity as identified in the Biodiversity Expenditure Review to the financial needed analyses based on organisations sampled, the financing gap is estimated to better inform the development of the Biodiversity Finance Plan which helps prioritising of biodiversity strategies and actions and build strong case for resource mobilisation. 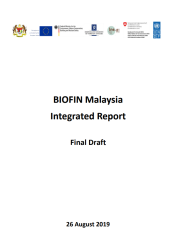