Viet Nam is ranked 16th among the Earth’s most biodiverse countries and is one of the ten richest centres of biodiversity in the world. As such, biodiversity is an important contributor to economic development in Viet Nam.

For example, since 2010 the number of international tourists visiting the country, with nature being a vital attraction, has grown three-fold from 5 million to more than 15 million in 2018. Nature is also an integral part of everyday life and livelihoods in the country.

Viet Nam is listed as having the highest marine biodiversity in the world as well, with more than 11,000 marine species of which 6,000 are zoo benthic species, 2,038 are fish species, 225 are crustacean species, 15 are snake species, 12 are marine mammal species, 5 are sea turtle species, 43 are sea bird species, 653 are seaweed species, 657 are zooplankton species, 14 are seagrass species and more than 400 are coral species. Those species are living in over 20 typical ecosystems of high biological productivity having crucial roles in primary productivity of the whole marine waters of Viet Nam.

Despite the important status, biodiversity is declining.

Ecological systems are affected and overexploited, and the species extinction rate is increasing. For example, despite an attempt to reduce the negative impact on habitats and marine populations by controlling harmful fishing techniques used in Vietnamese seas, the Dugong has not been seen in Vietnamese seagrass areas since 2016, likely due to habitat degradation and over-hunting.

Although biodiversity brings direct benefits to humans and the environment and contributes to the national sustainable development strategy, Viet Nam is also experiencing rapid biodiversity loss due to population growth, overexploitation of natural resources, illegal logging, and the expansion and intensification of agriculture.

The objectives of BIOFIN in Viet Nam are to support the country to assess the current financial flows to biodiversity protection, develop appropriate mechanisms to improve financial sustainability and assist in the implementation of the updated National Biodiversity Strategy and Action Plan. For these and other reasons, conserving natural marine and land habitats and maintaining or, where possible, enhancing their connectedness remain high priorities for the country, in order to reduce the ongoing impoverishment of the country’s biodiversity.

BIOFIN has introduced new, innovative ways of protecting biodiversity in Viet Nam. First the time ever, Viet Nam carried out a review of expenditures spent on biodiversity that helps the policy makers to have a better understanding of the gaps in biodiversity finance.

BIOFIN has leveraged the public investment for biodiversity conservation in Cuc Phuong National Park. With novel thinking and approaches provided by BIOFIN, the National Park’s nature museum has transformed to provide its services for academia and the public, creating new income sources for the park.

BIOFIN has also brought the concept of result-based budgeting (RBB) in biodiversity conservation, by piloting the RBB in Sao La protected area to enhance the efficiency and effectiveness of forest protection activities.

The pilot aims to support a protected area to adopt result-based budgeting for conservation activities and projects.

The pilot works closely with Cuc Phuong national park to develop a plan to sustainably run the museum which contributes to biodiversity conservation and financial autonomy of the national park.

The objective of this solution is to develop a fee collection system and management for Hon Cau MPA. It is expected that the fee system is set up in Hon Cau and starts to generate revenues for the park within two years but also that it provides an example for the other marine parks to start to set up similar systems.

4.     Development of procedures and standardized costs for result based budgeting and biodiversity monitoring and reporting in protected areas in Vietnam

The objective of this solution is to develop standardized costs applicable for all PAs and relevant public organizations in Vietnam in biodiversity monitoring and reporting.

5.     Implementation of Payment for Ecosystem Services in coastal/marine areas for policy recommendations in Viet Nam

The solution entails drawing up a plan for PES that addresses ecosystem gaps subject to offering opportunities for PES and defining and carrying out a relevant PES pilot. The plan implementation’s outcomes will lay the foundation for harnessing PES from other ecosystem services in Viet Nam, comprising an important resource for the financing of ecosystem conservation.

6.     Design a financial mechanism for conservation in fishery co-management

Hon Yen Island is about 20 km from Tuy Hoa City with rich biodiversity. Recent surveys show the biodiversity of Hon Yen Island is degrading due to over-exploitation and unsustainable practices. The solution entails working with the coral local community cooperative in evaluating the capacity of the island in receiving tourists, in proposing a tourism fee and a mechanism for managing the received tourism fee for conservation.

The solution aims to identify a viable financing mechanism to channel fishing related fees to conservation purposes. The specific goals are: (1) to provide the theoretical and practical basis and develop a feasibility study on fishery resource protection fees (rate, collection regime, payment management and usage) in accordance with provisions of laws and regulations on fisheries and financial management; (2) to design and implement a new financing mechanism for the fisheries resource protection and development activities at marine protected areas, local fisheries communities, fisheries administration and authorities.

The BER was completed with inputs from various sources at both the national and provincial level, such as: the Ministry of Agriculture and Rural Development (MARD), the Ministry of Natural Resources and Environment (MONRE), the Ministry of Science and Technology (MOST), Provincial Departments of Agriculture and Rural Development (DARDs), Provincial Departments of Natural Resources and Environment (DONREs), National Parks (NPs), Nature Reserves (NRs), etc. All collected data and information was analyzed following the guidance provided in the BIOFIN Workbook (2016). Two consultation workshops were also organized, to collect comments and feedback from relevant stakeholders and interested parties, which were used to frame this final report and its recommendations.

The BFP is the culmination of the BIOFIN process, incorporating all the information, evidence, and recommendations set out in the preceding three reports as well as taken from consultations with stakeholders. By presenting an analysis of a set of finance solutions and technical proposals to fill the identified gaps in biodiversity finance, as well as the economic and business case for their implementation, the BFP will serve as a comprehensive guide map for the expansion and amelioration of Viet Nam’s approach to biodiversity finance that encompasses all sectors of society. The draft BFP proposes a list of different financial solutions which will be selected at a later date based on consultations with relevant ministries, provinces, and protected areas. 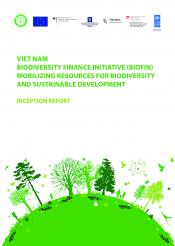