Over the past decade, Peru has been one of the region’s fastest-growing economies, with an average growth rate 6% in a context of low inflation (averaging 2.9%), with Peru’s Gini coefficient improving from 55.1 to 41.5, one of the best in Latin America, according to the World Bank. A favorable external environment, prudent macroeconomic policies and structural reforms in different areas created a scenario of high growth and low inflation, also with poverty rates falling by two thirds in the past 15 years.

Despite these positive trends, there are several cross-cutting and inter-related challenges for future sustainable economic growth and development of Peru. Inequality, regional disparity, and informality remains high, and post COVID-19 economic recovery a challenge for coming years. These challenges involve the complex issues of fragility, resilience, environmental impact on biodiversity and ecosystem services.

Peru joined the global partnership of BIOFIN Phase I in 2013. The Ministry of Environment took a leading role in the BIOFIN process analysis and definition of financing mechanisms for the conservation of biodiversity and maintenance of ecosystem services within a framework of sustainable development, both in relation to the country's objectives and its international commitments. Under the project, the National Biodiversity Strategy and Action Plan is being updated and the financial needs for its implementation until 2030 estimated. 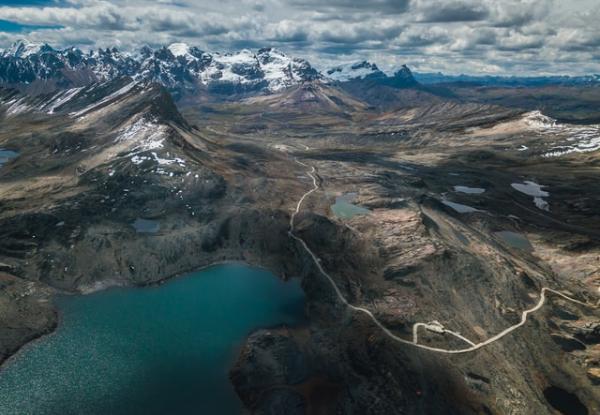 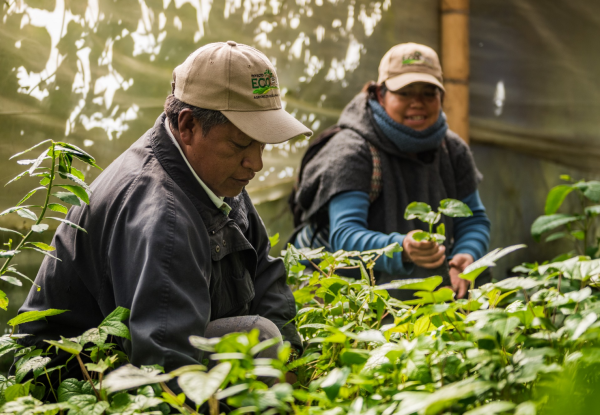 Finance for nature, a commitment of the whole society to the sustainability of the planet 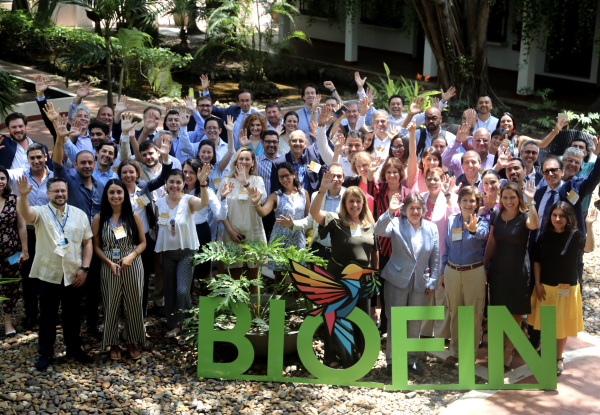 Where are the resources to conserve the world's biodiversity? in the private sector, experts say

Based on initial results of the Biodiversity Finance Plan, the following are the finance solutions planned for BIOFIN Phase II in Peru:

Finance Solution 1: Increasing Public Investment for Biodiversity; to strengthen the public entities’ prioritization of public investment projects in biodiversity and ecosystem services, based on guidelines of the National System of Multiannual Programming and Investment Management (Invierte.pe), Investments to Offset to Tax liabilities (Work for Taxes) and the Mechanisms for Compensation for Ecosystem Services (MERESE).

Finance Solution 2: Financing funds and green credits to leverage funding for biodiversity; which seeks to develop studies of public financing funds and promote green portfolios in financial institutions to diversify and enhance investment towards the financing of biodiversity with the participation of the Ministries of Finance, Environment and Agriculture, the Financial Banking Association, the Banking, Insurance and Pension Fund Regulator and the Peruvian Federation of Municipal Savings and Credit Banks, among other.

Finance Solution 3: Sustainable bonds for biodiversity to support economic recovery, which has the objective of conducting a viability study that enables a General Corporate Framework for the issuance of sustainable bonds in the microfinance sector to seek positive impacts on the conservation and sustainable use of biodiversity.

Biodiversity-minded public policy and institutions face several challenges in Peru. Particular threats come from agriculture, energy and mining, and the fishing sectors – and opportunities exist for stronger environmental efforts and collaborations.  Sectors within which there lie especially promising opportunities include the environmental, fisheries, tourism and foreign trade, energy and mining, agriculture, and education.  Perhaps most key in confronting these threats and capitalizing on the opportunities in terms of public policy is the country’s National Biodiversity Strategy 2021 and Action Plan 2014-2018 (EPANDB), which encourages a heightened recognition of the contributions made by biodiversity in terms of the country’s development.  Additionally, it promotes development planning and incentives for sustainable resource use while crafting mechanisms to ensure biodiversity, ecosystem services, and the preservation of ancestral knowledge.  Some of the main identified gaps associated with this Strategy and Action Plan include insufficient funding for Protected Areas (ANP), lack of attention to those bearing the indirect costs of biodiversity interventions (such as indigenous peoples and local communities), and limited attention to the threat of land conversión for crops (which is the primary source of greenhouse gas emissions in Peru).

Focal institutions engaged in the implementation of the National Biodiversity Strategy are The National Center for Strategic Planning (CEPLAN), the Ministry of Economy and Finance (MEF), the Ministry of Environment (MINAM), the Council of Ministers, and the Congress of the Republic. While funding for these institutions has increased in recent years, much of this funding has been directed toward national-level policy-making bodies and has not necessarily found its way to regional and local governments where localized implementation takes place.  The Ministry of Housing, Construction, and Sanitation and the Ministry of Agriculture and Irrigation will also play important roles in the coming years – especially given the role of each of these ministries in mobilizing resources toward water and sanitation.  It is worth noting that in Peru, the National Water Authority falls under the Ministry of Agriculture and Irrigation.

Water issues are of particular concern in the country given the recent impacts of flooding caused by El Niño and the projections for increased droughts in the country with the increasing impacts of climate change.  Relatedly, the Nationally Determined Contributions submitted by Peru in 2015 to the United Nations Framework Convention on Climate Change as part of the Paris Agreement seek to tackle greenhouse gas reductions through both mitigation and adaptation measures, including habitat conservation of forested land.  Ultimately, it is important to recognize these overlaps and a concerted effort should be made to efficiently align initiatives so as to optimize impact in terms of conservation and biodiversity.

This Biodiversity Expenditure Review analyzes public and private expenditures affecting biodiversity across three levels of government (national, regional, and municipal) and the private sector over the 2010-2014 timeframe.  During this period, a total of USD $1,378 million was spent on projects and activities with primary objectives related to biodiversity conservation – with an average of USD $ 276 million per year.  Of this expenditure, the average annual public spending was USD $199 million (72% of the total) – with 70% of that funding being used at the national government level, 14% at the regional government level, and 16% at the municipal government level.  This public spending averaged 0.11% of GDP and 0.52% of the total public budget and 0.63% of total public expenditures.  Upon considering projections from the Ministry of Economy and Finance (MEF), an annual increase in public spending of 2% is expected.

A closer analysis considered to what extent spending was directly aligned with the three principal objectives of the Convention on Biological Diversity (CBD): 1) conservation of biodiversity; 2) sustainable use of biodiversity; 3) fair and equitable sharing of the benefits arising from the use of genetic resources.  Using these parameters, results indicated that 55% of the total public spending was well aligned with these objectives.  The national government was responsible for 48% of this spending, while regional governments and municipal governments accounted for 14% and 38%, respectively.  Notably, a trend of increased local government spending on biodiversity-related efforts was observed – and in fact nearly doubled from 2010 (11%) to 2014 (20%).  While this coincided with a decrease in regional spending, this is in many ways a promising trend in terms of decentralized spending.

Further investigation shows that the environmental sector (including the Ministry of the Environment and the National Service of Natural Protected Areas) represents less than 1% of the national government’s budget and spending.  Agriculture, Tourism and Foreign Trade, and Production (including fisheries) sectors of the government represent the largest chunks of spending geared toward conservation and the sustainable use of biodiversity – as these sectors represent just over 6% of the national budget and 5.4% of the national spending.  It is worth noting here that the budget assigned to the Agriculture sector is four times higher than that assigned to the Environmental sector.

Estimations of community and family farm level efforts show that their traditional practices contribute USD $55 million annually to the conservation of potato species.

A financial needs assessment was carried out to estimate both the current spending and the gap in investment required to implement the National Biodiversity Strategy 2021 and Action Plan 2014-2018 and to achieve the desired results.  In 2015, more than USD $74 million was spent on the execution of the Biodiversity Strategy and Action Plan.  Results further point to a funding gap across all entities that were explored.  The National Service of Natural Protected Areas (SERNANP) reflected the largest gap (50%) requiring an additional USD $203 million over the course of 2016-2021. The National Council of Science, Technology and Technological Innovation (CONCYTEC) had the second-largest gap over that same time frame (USD $118 million).  In total, this financial assessment estimates the funding gap from 2016-2021 to be USD $381 million.  These results highlight the need to better align the federal budget with the financial spending necessarily to optimally implement and achieve the desired results of the National Biodiversity Strategy and Action Plan.

In order to analyze options to optimize and expand investment in biodiversity management, interviews with key stakeholders in both public and private sectors were carried out.  This investigation identified 41 mechanisms that allow (or could allow) for the mobilization of funds to help cover the finance gap in order to effectively achieve the desired results of Peru’s Biodiversity Strategy and Action Plan.  Of these, 9 were selected as having the largest potential.  These included: 1) public investment though ¨SNIP Verde¨ (the biodiversity and ecosystem-focused investments of the National System of Public Investment); 2) public investment through the Budgetary Support Modality; 3) grant competitions; 4) public works tax deductions; 5) The Biodiversity and Business Initative (ByE); 6) the Green Protocol for the Peruvian Financial System; 7) Payment for Ecosystem Services mechanisms (MRSE); 8) environmental compensation (“naturaleza por naturaleza”); and 9) investment funds through Forest Plantation.

Ultimately, findings suggested that the largest tangible benefits for biodiversity could be made by strengthening the ¨SNIP Verde¨ and Green Protocol for the Peruvian Financial System mechanisms.  In terms of the ¨SNIP Verde,¨ drafting guiding methodologies, building capacity, and technical assistance will all be key moving forward.  Public works tax deductions can also play an important role in environmental and biodiversity projects.  In terms of the Green Protocol for the Peruvian Financial System, there exists a high potential for encouraging private sector engagement.  A third area of high potential that was determined lies in public investment through the Budgetary Support Modality. Lessons learned can be gained from past experiences and efforts can be made to align future proposals with biodiversity considerations.

In order for these financial mechanisms to work, strides should be made to ensure the appropriate conditions for their implementation.  These include strengthening intuitions, aligning interests, and working to make biodiversity investment and returns more tangibly understandable.  It is also important to note that climate change funding is readily available – and given their complimentary interests, biodiversity initiatives might benefit from clearly articulating how they align with climate change issues in order to obtain funding and drive progress.

Informally, the Vice Minister of Strategic Development and Natural Resources articulated the following four priorities for Peru: 1) greening the agriculture value chain, 2) tourism and protected areas, 3) private sector engagement (including public works tax deductions & public-private partnerships), and 4) the work of the new Council of Ministers and their focus on water related issues.  Financing efforts geared toward biodiversity and conservation should work to stay up-to-date on national priorities and work to efficiently align efforts where possible.

Finance solutions will depend on the implementation of the above policy recommendations and finance mechanisms geared toward biodiversity.  Recent successes include Public Investment Projects geared toward the conservation of biodiversity and habitats in the Peruvian Lomas (isolated, oasis-like pockets of vegetation sprinkled throughout the Peruvian desert) and the Andean condor (an iconic species that is not only of historic cultural importance – but also provides an important ecosystem service as a scavenger that feed on carrion). Continued efforts will help direct more funds to biodiversity.