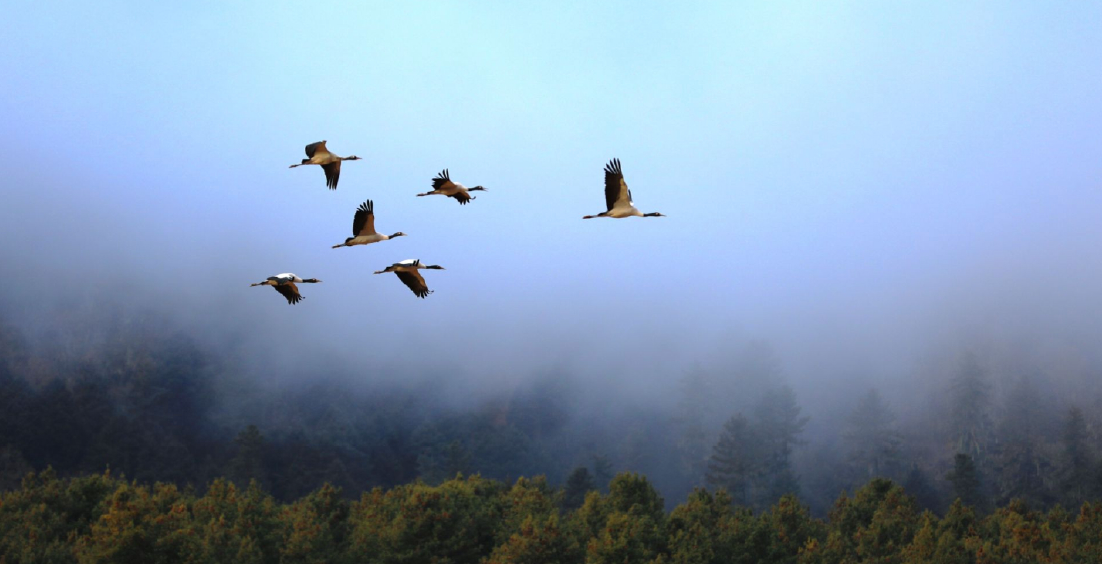 Nestled among the peaks of the Himalayas between China and India – Bhutan is a land of remote mountain valleys, rich in natural wonders – and with a population less than one million, one of the most sparsely populated countries in Asia.

Contrary to the declines across the rest of the world, flora and fauna populations are showing a reverse trend. For a large number of species under threat in the region, the country has proven to be an important last refuge. Its mountain peaks host some of the few remaining populations of snow leopard and red pandas reside near bamboo stacks in the high mountain forests.

Its tiger population numbers over 100 and is considered by IUCN to be among the most viable in the world. Bird populations are growing and new records frequently occurring. The 740thbird species was recorded in Bhutan in early 2019. For a small country, its number of bird species equals that of all of Europe combined and the small country is home to 30 percent of the world’s wild cats species.

One of the last groups of over 500 Black Necked Cranes, a species numbering below 7000 globally, crosses the Himalayas annually to commute between their winter residence in Bhutan’s Phobjikha Valley and their summer home in Tibet.

The country has demonstrated courage and innovation in pursuing its national development model, resisting the common “GDP growth first — worry about the environment later” approach that characterises most countries.

Instead, it has developed a new growth paradigm known as “Gross National Happiness,” which includes economic growth, but amid a basket of other targets including factors associated with people’s happiness. It seeks to achieve a harmonious balance between material growth with societal inclusiveness, resilient cultural identity, environmental sustainability and good governance.

Bhutan’s model has already demonstrated remarkable results, as the country has achieved multiple development milestones. The life expectancy has risen from 66.3 to 70.2 between 2005 and 2017. Measles was recently eradicated, and Malaria will potentially soon follow.

Bhutan will officially graduate from its Least Developed Country (LDC) status in 2023. It will achieve this while ensuring the constitutional requirement to preserve at least 60 percent of the nation under forest cover for all time.

Today, the nation’s forest cover, at 70 percent of the land area has the capacity to sequester 6.3 million tons of carbon dioxide — four times what Bhutan emits — making it the only carbon negative country in the world. A recent evaluation has estimated Bhutan’s total ecosystem services to be worth around US$ 15.5 billion per year.

But despite Bhutan’s carbon negative status, unique development paradigm and conservation core, there remain challenges. Bhutan has one of the highest per capita consumption of fuel wood in the world, 69 percent of the population relies on climate-sensitive agriculture to earn a living, and economic growth is strongly dependent on investments in hydropower.

Economic diversification is a key element of the country’s new development strategy, in particular looking at continued sustainable development of ecotourism and small and medium enterprises. Financially, hydropower also overshadows other resources. The Domestic tax base averages at below 15 percent, which is relatively low. The IMF is committed to work with the government on tax reforms, in particular to rationalise the Sales Tax system into a more streamlined system.

When putting a looking glass over the situation of development finance, a similar picture emerges. The government is looking at different ways development objectives can be financed, including innovative financing mechanisms.

During the country’s pinnacle policy dialogues every two and half years, known as the 14thRoundtable Meeting in mid-March, the State Secretary of Finance, Dasho Nim Dorji outlined a number of innovative financing options such as issuing Green Bonds, e-payments, establishing a new Climate Fund and reforming the tax collection system.

A key element in this strategy is their work on the Biodiversity Finance Initiative (BIOFIN). This is a tool developed by the United Nations Development Programme (UNDP) to scan the existing landscape of financing a country’s natural resources, to rethink and diversify existing options. It lays out a structural approach to measure past expenditure and future needs for finance to fund a country’s biodiversity goals.

BIOFIN has already hit fertile ground in terms of conservation finance in the country. The country was the first ever to deploy what is known as a Conservation Trust Fund — a national fund that is independent from government and builds up an endowment to finance conservation work in the long term. An initial investment of around US$21 Million has since tripled, providing a secure and long-term source of finance to fund projects to protect and better manage the country’s nature, protected areas and surrounding communities. The country also recently set up Asia’s first Project Finance for Permanence in Conservation mechanism called Bhutan for Life — a transition fund of USD 43 million in 2017 to permanently protect and finance its protected areas.

Initial analysis under BIOFIN Bhutan demonstrates a number of other opportunities, including generating further revenue from ecotourism to re-invest into natural resources, exploring local level financing options, maximising returns from forest carbon stocks, using royalties from hydropower for conservation of watersheds, and capacity development of the judiciary system in applying an effective system of fines and fees through a dedicated “green bench.”