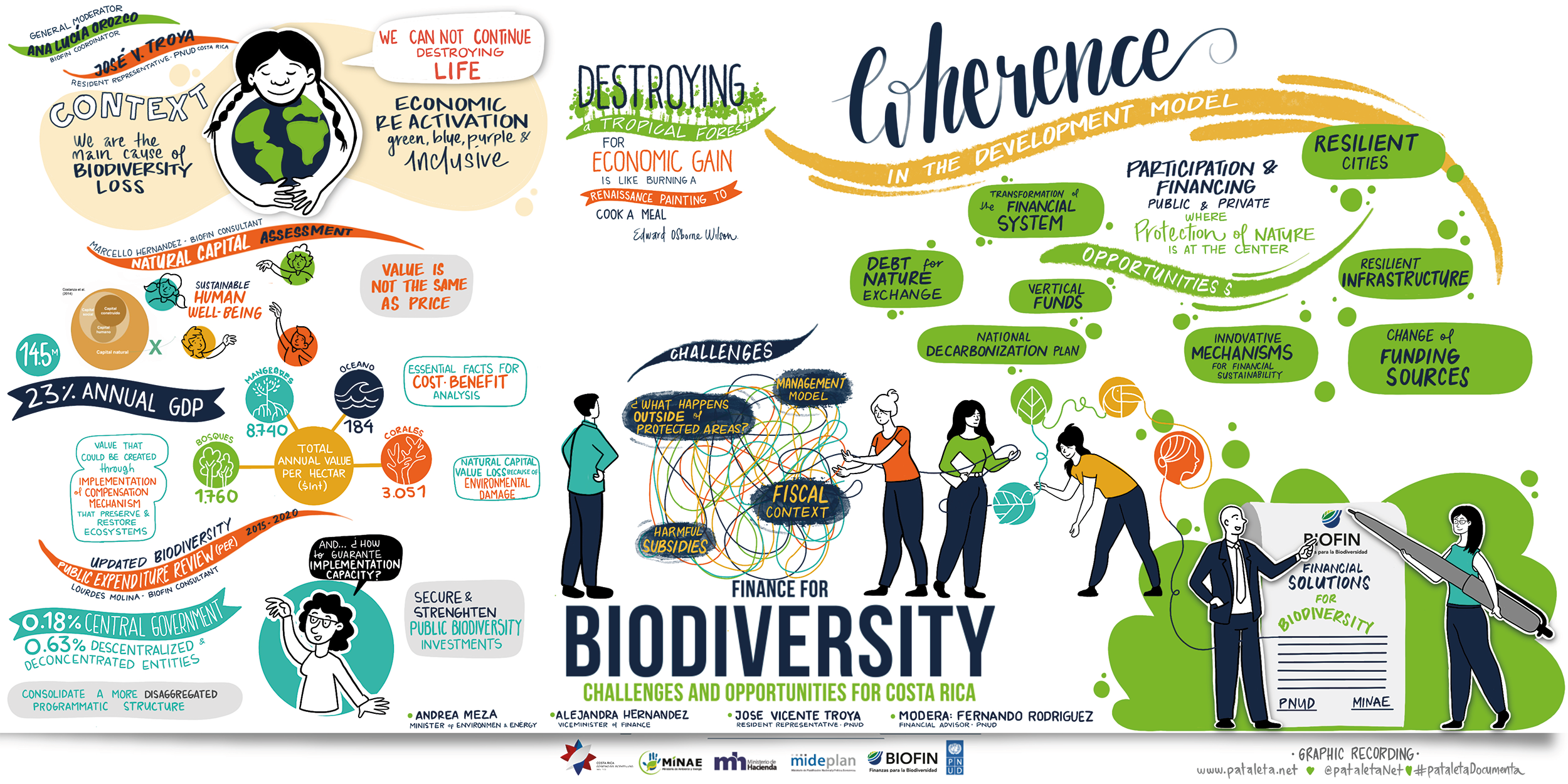 In Costa Rica, BIOFIN has promoted the mobilization of $84.9 million, under six financial solutions, including a new generation of PES, a green bond for protected areas and the crowdfunding initiative campaign Footprints4ourFuture to restore nature and promote green wages especially for rural women in Northern Costa Rica, tackling  biodiversity loss, climate resilience and economic recovery.

On International Biodiversity Day of the year 2021, BIOFIN presented relevant knowledge products and signed a memorandum of understanding  at a high level event that supports work in the country to develop financial solutions to reduce the finance gap.

One of the studies presented is the annual natural capital value of Costa Rica, $14.5 billion, which represents 23% of the National GDP (Year 2019) and the net present value of the country's natural capital is estimated at a total of $ 845 billion.

In this context, and due to global trends and economic pressures that produce loss and deterioration of biodiversity, it is relevant to quantify the expenditure that the country makes with public resources to ensure the conservation and sustainable use of biodiversity, both at the level of the central government as well as in the rest of the public sector, and identify financing gaps and financial solutions that allow maintaining, restoring and promoting the benefits of nature for the Costa Rican society and economy.

An updated Biodiversity Public Expenditure Review for the period between 2015-2020, using the BIOFIN methodology, allowed the identification of primary public investments in biodiversity, that is, those whose main purpose or final cause was the protection of biodiversity, as well as secondary investments, those that indirectly contribute to this objective.

According to this analysis, the average annual spending on biodiversity by the Central Government for the period represented 0.18% of GDP and in deconcentrated and decentralized entities, an annual average of 0.63% of GDP.

During the event, a High Level Panel was held to promote dialogue on the challenges and opportunities for financing biodiversity, this panel included the reflections of Andrea Meza Murillo, Minister of Environment and Energy, Alejandra Hernandez, Viceminister of Finance and José Vicente Troya Rodríguez, UNDP Resident Representative in Costa Rica. There has been a record of thematic bond issues, which has been driven by a greater appetite of investors for these types of instruments.

Minister Meza highlighted the importance to properly understand the concept of natural capital value, in order to promote its proper use, priority must be given to biodiversity and nature-based solutions. The protection of Protected Wild Areas is important, but we must also know what is happening with other natural spaces, with agricultural production, cities and marine-coastal areas. The discussion should not only be environmental, but also coherence with other public policies, such as migration to a new economy.

“A greater effort is required to mobilize resources, eliminate harmful subsidies and promote greater participation of the private sector in this effort,” she stated.

Among the main challenges discussed were the current fiscal context and the need to take measures to solve it, the drop in economic activity that will affect financing for biodiversity, as well as the possibility of promoting a green and inclusive economic reactivation. More investment in new activities aligned with a green economy implies more growth and additional resources for the treasury.

Vice Minister Hernandez reflected on different forms of development, in which public investment plays a role in this process. This transition must also ensure fiscal sustainability, promoting, for example, a change in public funding sources.

Regarding opportunities, there are successful international experiences in the issuance of thematic bonds, in order to contribute to environmental objectives.

“We must not neglect other forms of financing to mobilize resources for biodiversity, such as the debt-for-nature swap, of which the country already has successful experiences,” stated Jose Vicente Troya Resident Representative of UNDP Costa Rica during his interventions.

Considering the contribution that the country's biodiversity makes to the economy, investment in biodiversity could still be greater and efficient public expenditure is critical; for this, it should also seek to add resources from the private and financial sector to this effort.

As part of the studies carried out, BIOFIN has also been studying what tax exemptions have a negative impact on biodiversity and what alternatives could arise to repurpose them.